That’s what comes to mind when I see this.

But! There is something else in play. It’s been there since I moved to Victoria just over a year ago. I wonder. …. 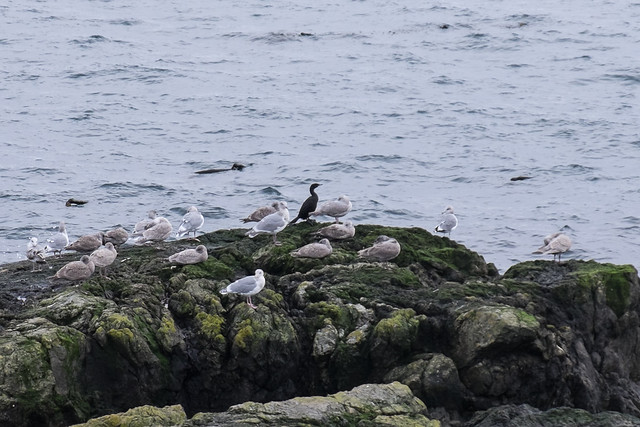 For better or worse, in every group, there’s at least one member that stands out from the rest.

If you can be the good one, do that.

Ever notice how birds always face the weather head on. One reason is that the air flows over their feathers and keeps the feathers flat, trapping warmer air under the feathers to keep the birds warm.

Standing the other way, with their backs to the wind, just results in ruffled feathers and colder birds.

There’s a lesson about life to be learned there….

At Clover Point in Victoria, there’s a pumping station with some doors that appear to match the rock wall that surrounds them – sort of.

The doors are quite a bit darker than the walls, and they are plastered with signs pleading for people not to climb on the walls. Still, it’s a good effort to camouflage the doors and make them fit in with the wall.

Here’s a closer look at the doors. Can you see the hinges, the lock and the handle?

<rant on>I get it. Generating a news paper costs money, and advertising pays for it. But paying for the paper does too, doesn’t it?

Why, oh why, when I buy a news paper, do I have to break through ads to get to two, not one, but two of the sections to get to the news; one of which, I might add, is the front page of the damn paper. Grrrr.

Wikipedia definition: “use some type of “gimmick” in an attempt to keep viewers’ interest, and which is taken as a sign of desperation”.<rant off>

Above: the paper today in Victoria – on the left, section C1; on the right, the ‘front’ page. The ads had to be removed to get to the news. 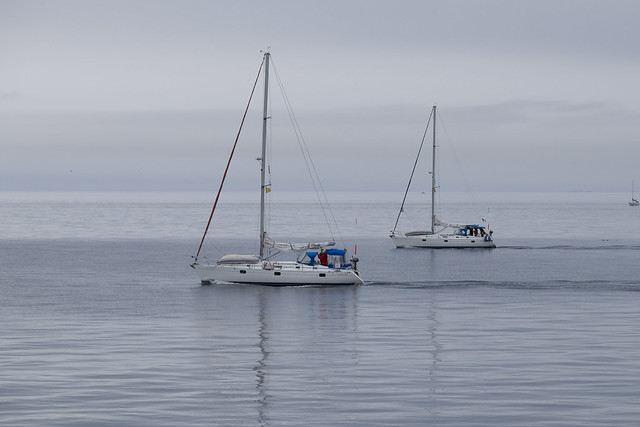 I wondered what their story was; going home? rentals finished for the year? close friends off to another port? strangers who just happened to cross paths?

Perhaps it’s best left to the imagination, and accept the peaceful feeling it leaves me with when I look at the photo.

I took care of sister’s cat for 10 days or so back in July. That was quite a milestone.  I’m mostly a dog guy, after having 2 dogs for over 15 years, but it went well, and the cat seemed a lot friendlier after that.

In fact, I got invited back for a replay. Sister and her hubby had a conference to go to in Vancouver, so they asked if I could drop in for a bit and cat sit. They left Thursday night, I arrived at their place on Friday morning and stayed through Saturday morning. They’re coming back tonight.

How did it go? Well, did the cat ever have a lot to tell me! She mewed and mewed pretty much constantly, from when I got there until I left. In and out, in and out. Mew mew mew mew, in and out. It got so bad that last night I just had to tell her that I was ignoring her, because she wouldn’t shut up and I had no idea what she wanted.

The strange thing was that she shut up and had a nap after that. Weird, eh?

Guess they know more than they let on.