I see this kind of thing all over the place, but this is the first time it’s happened to me. I was texting a friend to set up a lunch date and autocorrect got somewhat over-zealous. I had to try again, right away 🙂 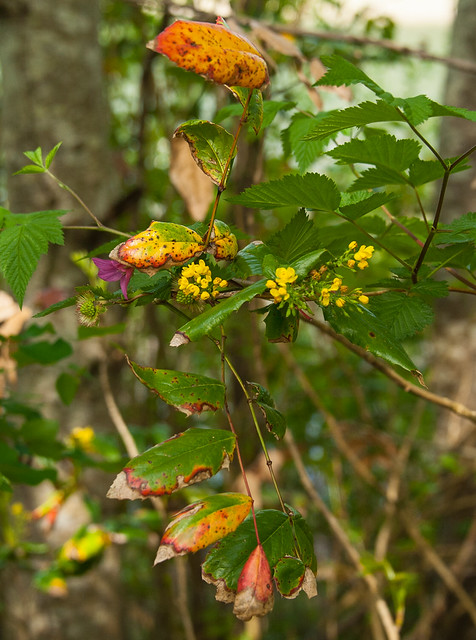 The whole thing comes together in a weird, wonderful, colourful way, don’t you think?

On a walk around the lake this morning, I ran across this mishmash of colour.

On the left-middle, you can see a red flower and new, green berry of a salmonberry.

More in the middle, are Mahonia leaves, many of which appear to be diseased (perhaps a rust?) and yellow Mahonia flowers.

The whole thing is surrounded again by green Mahonia and salmonberry leaves, with a background of browns from nearby trees.

An odd collection, and I like it. But that’s just me.

There is lots of competition on the forest floor these days. I found this Siberian miner’s lettuce poking up through the space in the axil of wild lily of the valley leaf. Where there’s a will, there’s a way, I guess 😉 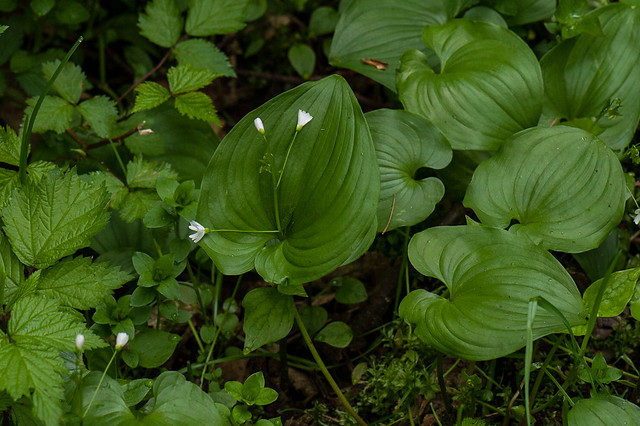 Another photo from my trip to Bear Creek Park the other day.

This red camellia flower looks like a setup, but I swear, I didn’t remove the petal for a better look. This flower was just there waiting for me…exposing itself. 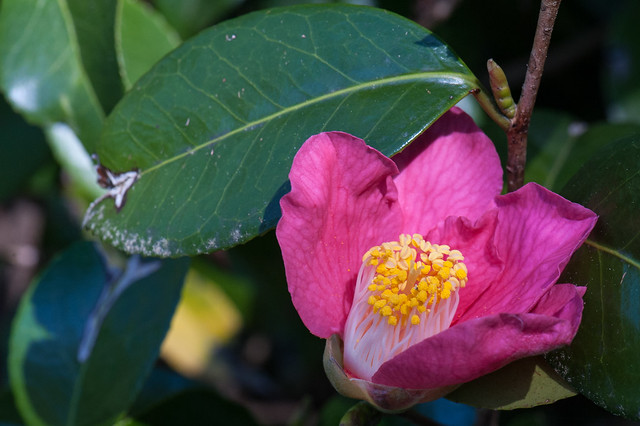 When the sun came out this afternoon, I headed down to Bear Creek Park for a change. The park has a large garden filled with cultivated plants, and as expected, the gardeners had been hard at work.

Along with the usual pretty flower shots, I found this little fella (gal?). Seems part of it couldn’t decide whether it was a leaf or a petal, so it went half way to both 😉

Curious the way it leans over to the right, when the rest of the flower seems to be leaning a little to the left. 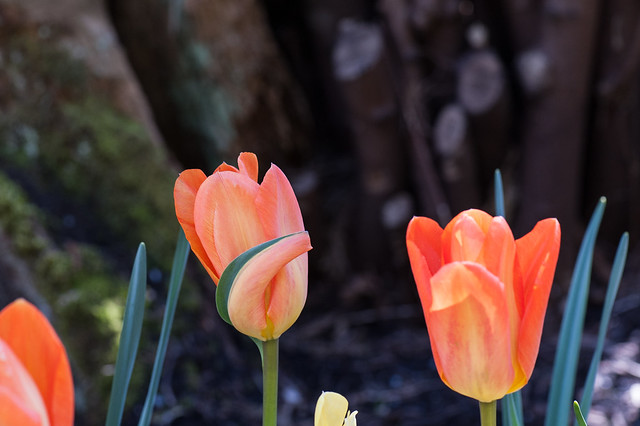 One of the things I do in my spare time is to act as a ‘roadie’ for a band called Circle of Friends. I help set up and pull down, as well as manage some of the sound mix while they are playing.

One of the recurring gigs is at the Bradner Flower Show in the Fraser Valley. We played there for 3-4 hours yesterday and today, and we had a ball.

Today they put some chairs out, and there was an group of seniors sitting in the front row tapping their feet, waving their arms and swaying to the music while they sang or just mouthed the words to many of the songs the band played.

Just as the band tried to take a break, they requested just a few more songs. Seems their bus was leaving in about 10 min, and they wouldn’t be there when we got back.

Heh, we obliged, and taunted them with some songs they might be familiar with. They loved it, and when we had to break, they ran up to the stage in a line, gave everyone a hug and a kiss and ran off again. Too funny, but really nice.

It’s random moments like that that we’ll remember for a long time…and it’s what makes performing at community events so rewarding. 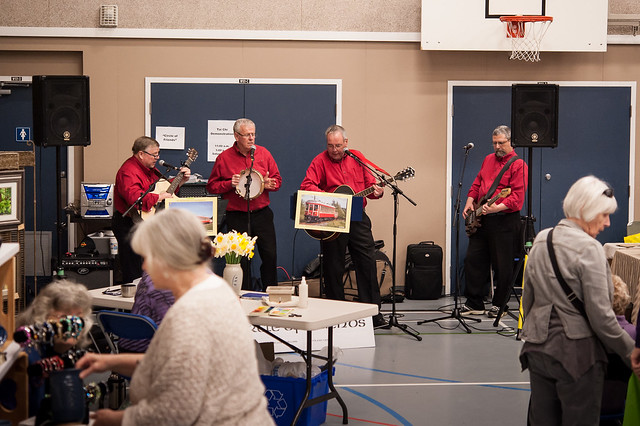 It’s interesting to watch the plants in transition this spring. I haven’t had the time to do that for a while. In my life before, I spent each spring watching conifers ‘flower’ and produce cones. Out in the forest, you couldn’t help notice many of the other plants developing as well.

This photo is not the greatest, but it does illustrate part of the transition of salmonberry flowers to berries on the same twig. Apparently the shrubs can keep flowering for a long time, while the berries are ripening.

I’ll have to keep watching for a better shot. I’m learning to use my 105 mm lens, and depth of field seems to be a bit of a struggle for me right now. It’s coming though… 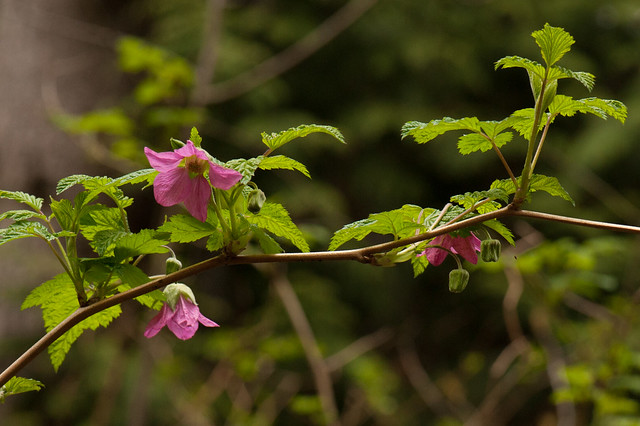 It was sunny and warm at Green Timbers Lake yesterday, and the fisherfolk were in their glory. This strip along the south end of the lake seems quite popular. I’ve actually seen a couple of small catches over the last few days.

Nice to have this spot in the middle of downtown Surrey. 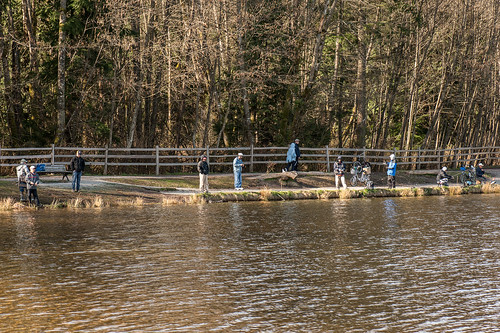 It was a simple conversation this morning that could have gone so bad.

In the 1930’s, the area that is now Green Timbers Park in Surrey was clearcut for rail ties and lumber. It was the last untouched stand of trees in the area, and the cut got people so angry at the Province that the Province decided not to develop it further. In the end, they protected a full section (640 acres) of land.

In fact, it became the first reforestation project in the Province of BC. At it’s peak, there was a nursery producing 3-5 million trees a year and a reforestation research station on the site that served the entire province.

It was also a demonstration project. Some of the area was replanted and tended carefully. (Heh, each tree was planted by a local dignitary and most remain today.) Other areas were just replanted and left to grow, or left alone to regenerate naturally. The difference is quite marked as you walk through the park.

These trees are about 85 years old and are in an area that was planted and left on its own. They did pretty well, compared to other areas that grew back naturally. Those areas are still heavy with hardwoods (Alder, Cottonwood) and brush, with fewer conifers.

There were a few historical buildings left from the original nursery, and they’ve become a nature centre. Much of the park remains, although development has eaten bits away here and there.

It’s a beautiful place to wander about, especially on a sunny day.