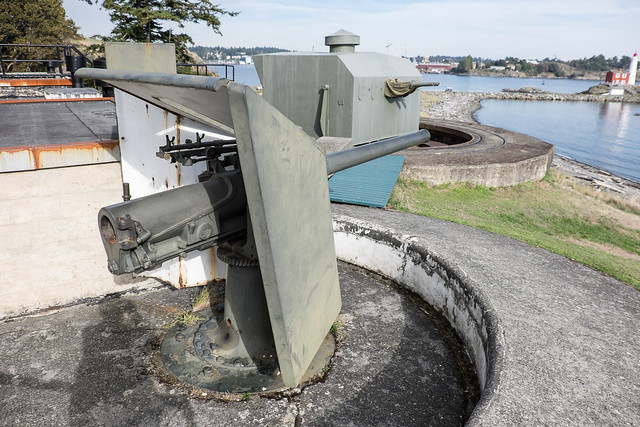 These preserved guns, and other older canon installations at Ft Rodd Hill Park in Esquimalt BC, are a reminder that the west coast of North America has faced it share of wartime threats.

In the second world war, for instance, these guns were used in combination with submarine nets to regulate traffic in and out of Esquimalt harbour. The nets went from about the Fisgard Lighthouse (seen in the upper right) across to another fortified installation.

For a while, Japanese submarines plied the west coast, looking to disrupt shipping. In fact, there are reports of at least one submarine (I-26) attacking a west coast lighthouse at Estevan Pt. on Vancouver Island.

There was never the death and destruction felt elsewhere during the war(s), but men and women still had to be there to stand on guard.

I’m thinking about this now, because my dad was one of those people. He flew the east and west coast of Canada in a Canso aircraft as gunner/observer, looking for submarines and other enemy shipping. Luckily, he said that on the west coast, most of the time they were just spotting whales.

Just remembering my dad on this Remembrance Day eve.