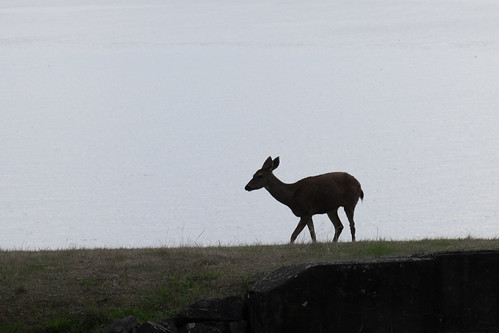 This deer was on a grassy berm last October, in one of the gun batteries at the Fort Rodd Hill National Historic Site in Esquimalt BC. There was a small herd running around. Not surprising, given the number of deer on south Vancouver Island. They are everywhere.

The fort was an interesting place. It, and other batteries and forts in various forms protected the Esquimalt and Victoria harbours until the 1950’s. Here’s a short description from the Parks Canada website:

Fort Rodd Hill NHS commemorates the national significance of the Victoria-Esquimalt coast artillery fortress in the defence of Victoria and the naval base at Esquimalt harbour, as part of the larger defence strategy of the British Empire and Canada, 1878 to 1956.

We don’t have a long history in Canada, so it’s nice to see them protecting and preserving some of it.